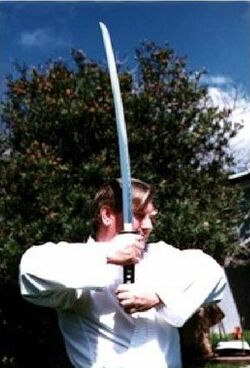 I met Bill in approximately 1974 on an interclub visit Sensei Rob Dobson had arranged with his club. He had many strong fighters and over the years Rob and Bill worked with Sensei Karol and Sensei Joe to fascilitate competition for the contact karate clubs.
In the early years he would please the crowds by bending iron bars with his neck and the blade of knives with his abdomen. He commanded respect and was very knowledgeble. After Rob had moved interstate it was Bill and the other founders that graded me to 5th Dan and the committee passed my 6th in 2007.

In the photo at the bottom of the page are some of Bills students who train with me at the Burragah Centre since he passed away in 2005. Also below are pictures showing him as referee of my fight in 1986 against one of Karols students and of tile breaking. In the later years we worked together as referee and judge and the last photo shows my student being presented a trophy by Bill in 2004 after winning the contact division. It was Bill who gave Karol an 8th Dan Grading in 2001 during his 70th birthday celebrations. Also is an old photo of the 4 founders Karol, Rob, Joe and Bill working together at a tournament. Out of the picture is Dante feeding the trophies to them for presentation. According to Steve, a 2nd or 3rd Dan with Bill, the fastest anyone has achieved a Shodan with Bill was Darren who took 5 years. Steve took 7years and said that was working hard and consistantly, but often it would take longer.
As a tribute to someone who has involvement in my Martial Arts history and did make a difference here in South Australia I feel it fitting to have a page to support his students who now train with me.
Kym Reid.

Bill Vaughan the founder of Zenbukan Karate Jutsu was born in Walsall, Staffordshire, England in 1931.
As he approached his 11th birthday, he was inspired to take up some form of combat art by pictures of commando’s practicing unarmed combat and the usual school yard bullies.
He met through fortuitous introduction, Shihan Jim Hipkiss and was taught the art of Daito Ryu Aiki Bujitsu. He also took up boxing during this time.
He went into the army in 1949 and was posted to Malaya in 1951 to 1954. Here he was exposed to the teachings of Sifu Ah Fat and became skilled in Chuan Fa Kung Fu.
On a training visit to Japan he became involved with Oyama Karate and stayed with this organization until 1975 when after a political incident he left and founded and taught his own style, Zenbukan Karate, meaning the “Complete Way”.
Zenbukan was a progressive style taking the best techniques and adapting them to specific needs, discarding the impractical while preserving the traditional and keeping up with the modern trends.

Bill Vaughan taught Zenbukan Karate Do. John, Brian, David and Paul were all graded blackbelts by Bill.
Bill's student, Doug, left to train in Kyokushin and then went on to open his own dojo. One of his students was Graham Early who took over the club. Andy Oxenham was one of the students that stayed on with him and is now the Adelaide AKKA representative who we had at our club and was a judge for the AMAC tournaments. Bill and Rob both had kyokushin as the principle guide to training and there in lies the similarities.
Two of Bill's assistant instructors, Brian and Paul, ran a Womens and Childrens club. I was made an honorary member for my help and when Bill died they asked that I open up again at Modbury and run a club there for adults. Hence the reformation of St. Jays Freestyle Jujitsu club renamed Jinen Karate Jitsu.

Apologies if there is anything incorrect. Bill's students will research and try to improve on the details